For 62 years, St. Louis was my home. (Full disclosure: I spent a year in Lawton, Oklahoma, but only in body, not in spirit -- though I did have some grand adventures in journalism there.) Anyway, for 62 years, St. Louis was my home, but now, it's a fun place to visit, a place to catch up on hugs (and news) from dear friends and a place to experience some of the world-class attractions there that I love best.

St. Louis also is a place to be way too hot and way too cold, but fortunately the weather was relatively moderate during a recent quick trip. Oh, it was hotter than in San Francisco, but I just kept telling myself the humidity is good for my skin, my lungs and my hair, so I only whined a little.

Though I meant to take a lot of pictures while in town, I took only a few, so this post will be an album of photos followed by a string of word pictures. First, the photos.

Other highlights of the trip, in chronological order, include:

*In case you are wondering, the attraction at Dewey’s is the Harvest Salad.

A big perk on this trip was time spent with a lapful of cats – Cleo and Oscar, to be specific, new pets at Judy and Scott’s house. (Of course it was good to see Sasha and Bailey as well, in case they are reading this.)


As always, my time in town was short, so I missed seeing many, many people that I love. Next time!

Posted by LateToTheHaight at 9:21 AM No comments:

Five Days in My Paradise

What Champe did not know about was the quality of light here, the fresh air, the distinct aroma of vegetation on the hillsides, the wooded slopes, the many city parks and the many interesting residential neighborhoods. She did not know about the mystical nature of the fog, the friendliness of everyone on the street, the many hills, the brisk ocean breezes that blow away worries, the cultural diversity, the breathtaking beauty of the skyline from atop Twin Peaks, the grace of the Palace of Fine Arts, the verdant beauty of Golden Gate Park or the surprisingly wondrous views that lurk down many a street.

Champe did know that I like to sit and stare at water, but she didn’t fully understand that, I think, until she did some water watching herself here!

Places we went, things we saw, people we met in the course of her visit are summarized here, with some pertinent photos.

Day One: Drove to the top of Twin Peaks, next drove north and attempted to get into Muir Woods before the hoards (we failed), headed up to the dramatic Muir Beach Overlook, drove around the Bolinas Lagoon (where we saw six turkey vultures sitting on a power line, carefully considering the health of people driving by), visited with my artist friend Emmeline Craig, enjoyed lunch at the Coast Café, drove again around the magical lagoon, stopped in Stinson Beach to shop at The Blissful Gallery, drove through the lovely Olema Valley and then coasted among the redwoods of Samuel P. Taylor State Park. Then back to the apartment for homemade pulled pork sandwiches and Three Twins Sea Salted Caramel ice cream. 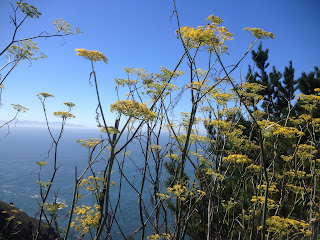 Day Two: Took a bus to the Castro (where we perused the costume department at Cliff’s and then paused at the former site of Harvey Milk’s camera shop), took a streetcar downtown to the Ferry Building, visited with street vendors, scarfed down a cheese toastie at the Sidekick, were mesmerized by mushrooms at Far West Fungi, fondled the lovely Heath Ceramics, played in a bowl of Rancho Gordo’s dried beans and gobbled up hazelnut macarons. We then took a bus to Union Square, where we spied a man wearing two iguanas, popped into Pinkberry for frozen yogurt, regarded Union Square, peeked in the Chanel store window and then hopped a bus to Haight-Ashbury. There we meandered through the Sock Shop and Artisan Foods store and looked in other windows. Dined back at the apartment on fish doused with puttanesca sauce, tasty squash from Emmeline’s garden and a heavenly mango grown in California. 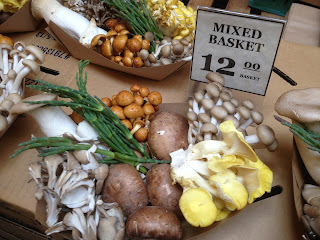 Day Three: Back in the car, we cruised by the Painted Ladies, drove up the wonderfully steep Divisadero, drove down the curvy Lombard Street, headed to the Warming Hut at the far end of Crissy Field (Champe walked up to the south leg of the Golden Gate Bridge while I sat and stared at water and spoke with a sea lion), shopped for shoes at The Sports Basement and then drove to the Haight Street Market to pick up sandwiches and (be still, my heart) Mexican Chili Chocolate Ice Cream. (http://stevesicecream.com/) After lunch, we took two buses to North Beach, where we sipped sparkling grapefruit beverages at Reveille, checked out the art show in Jack Kerouac Alley, paid homage at City Lights Books, delighted in the laundry hanging to dry high in apartment windows, poked our way through Chinatown (the largest outside Asia), caught a bus to lower Pacific Heights to see what the Eileen Fisher store might have on sale (one sweater – one), strolled through stores by designers Marc Jacobs and Jonathan Adler (the fedora was just too big!) and then headed home. Had a scrumptious dinner at Padrecito in Cole Valley! 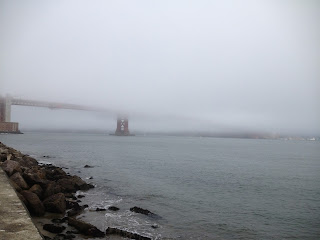 Day Four: Met at Reverie in Cole Valley and headed off to Pier 33 on the N-Judah and then a streetcar to embark on the boat that takes 1.3 million visitors per year to Alcatraz Island. I liked it! I had seen an hour-long special on the cellhouse tour and the island, so I felt as though I had been there already, but the introductory video and the audio tour both are well done, and I am so glad we went. (Personal favorite thing: Bullet holes in the floor, remnants of a prison riot.) Champe and I also sat and looked at water and the mist-shrouded silhouette of San Francisco Bay from atop the prison building. Got a bonus on the ride back to Pier 33 – America’s Cup boats, a sailboat and a ferry all converged as I was hanging out on the front deck of the boat, so I got a very cool photo of the traffic jam on the water. We headed back to the apartment, ordered pizza and salad from Bambino’s. Then it was time for me to pick up my own grand-bambino and play with him. Champe, an ardent tennis fan, celebrated that her fave, Rafael Nadal, had won the U.S. Open, chatted with Milo for a while and then meandered off in the fog to her hotel. 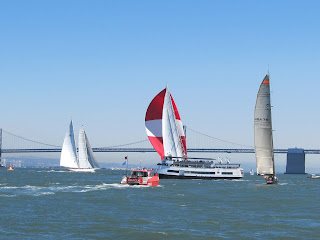 Day Five: Picked up Champe and her luggage and drove her to my apartment, where we had lots of fresh fruit and a carb or two for breakfast. Then we drove to the airport via Ocean Beach. Before I lived in this glorious place, I always hoped for a last look at the edge of the continent before heading inland, and I think Champe enjoyed that.

So Champe arrived knowing a great deal about San Francisco. Now she understands my fascination, and I believe she is completely enchanted with the City by the Bay.

Posted by LateToTheHaight at 2:44 PM No comments: