Charming towns, the storied Rhine, modern cities, UNESCO World Heritage Sites, the winding Main, world-class museums, busy marketplaces, the beautiful Danube and even waltz lessons in Vienna – Viking Cruises offers all that and more as part of its Grand European Tour, a 15-day trip from Amsterdam to Budapest.

I made the trip in July. While researching the geography, culture and history of Central Europe, a refrain from an old song skittered through my mind, something about pretzels and beer. (The song was “Those Lazy, Hazy, Crazy Days of Summer,” released in 1963.) Apparently I was headed to a part of the world that worships both – and sausage too!

On Viking-sponsored outings and also during free time after daily walking tours, I sampled some of each and enjoyed every moment. Here are some of the highlights of my personal culinary tour.

Viking offers an evening excursion in Cologne, a traditional dinner at Brauhaus zur Malzmuhle (established in 1858) that includes stops at two other brew houses.  Kölsch, the local beer, is served ice cold in seven-ounce glasses, and the only way to stop waiters from replacing a half-empty glass is to top it with a cardboard coaster. 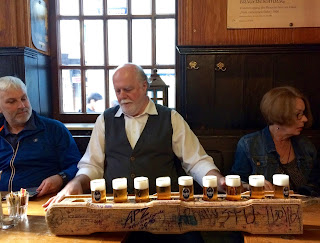 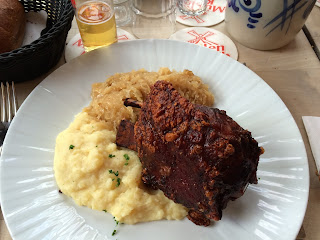 What a great excursion! We dined on haxenhaus (tender, slow-roasted pig’s knuckle), sauerkraut, mashed potatoes and salad dressed with a pungent mustard vinaigrette. Dessert was a custard of malt sugar topped with pieces of dark chocolate. Philip Crowder, a native of San Francisco who has lived in Cologne for decades, led our lively group, and the beer dinner absolutely was a highlight of the trip.

At the center of this small, historic town is the Gasthaus zum Riesen – a 425-year-old guesthouse – where I stopped with friends for beer (Faust Hefe-Weizen),  pretzels (served with a sweet, hot mustard) and apple strudel (served with vanilla ice cream). 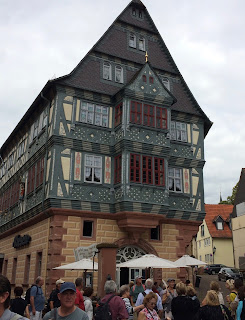 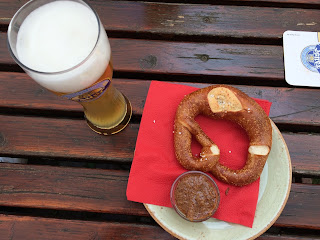 Flushed with joy (okay, and maybe from the beer) after buying an Ulla Popken jacket marked down from E60 to E10 in a classy nearby shop, I also bought a Faust beer glass, perfect for enjoying Hefeweizen at home.

A trip to the Franconian countryside (an optional tour out of Bamberg), was a must so I could taste the legendary Rauchbier, a smoked beer. At Drei Kronen (Three Crowns) in the town of Memmelsdorf, the brew master greeted us, pretzels were brought to the table and each of us was served a glass of the smoked beer and a glass of a light wheat beer. 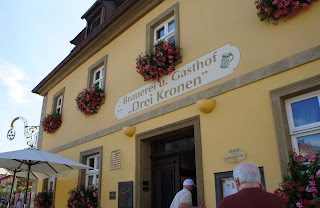 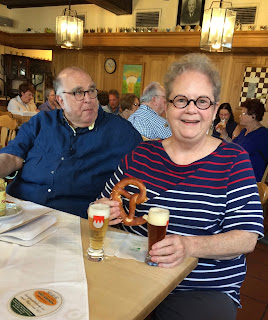 Some say the smoked beer tastes like ham, and most people – including the captain on the Viking ship – don’t care for it. It was OK, but the wheat beer, made with hops from Oregon, suited me better. Everybody enjoyed the pretzels, and some of us darted across the street to a bakery to buy some to take back to the ship.

Here I went in search of the famous gingerbread cookies (which I didn’t like at all) and then I settled in at a table at Bratwurst Röslein, a restaurant known for excellent sausage served on a traditional tin plate, with sauerkraut on the side. What a great lunch! 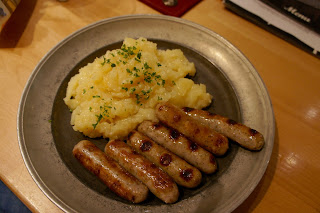 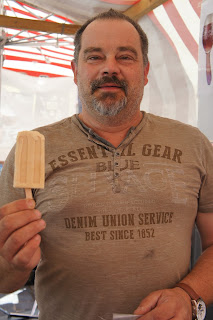 The Alte WurstKuche (Old Sausage Kitchen), said to be the world’s oldest bratwurst grill, is in a tiny building, so customers sit at picnic tables outdoors near the river. I sat down at an empty table, ordered a small plate of sausages and a beer, and was quickly joined by seven Australians traveling together on another cruise ship. 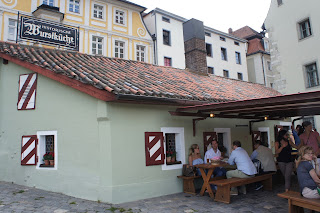 A new server appeared and handed the lone man in the group a plate of food. When the original server came back to the able with my beer, she looked at the man, looked at the food, looked at me and said, “That’s your food.” She asked the man if he had even ordered. He admitted he had not, and continued to eat my lunch.

When the server walked away, the Australian women (one was the guy’s wife) and I all burst out laughing. After we all had been served, the group bought my lunch because they said I was such a good sport. (Friends know I love Australians. Ross Winter, an Australian who was very important in my life, likely would have swiped the plate back from the guy, but even Ross would have laughed.)

Aboard the Viking Longship Gefjon

Two nights later, dinner on the Viking ship honored the cuisines of Germany and Austria, so it was time for more sausage, pretzels and beer as well as other traditional dishes and enticing desserts. (Dirndls and Lederhosen were not required, but some were in evidence.) 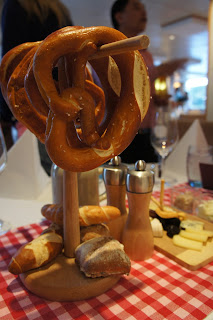 Before I left the dining room, I asked the ship’s hotel manager – who happened to be Bavarian – to thank his people for their fine foods and beverages. 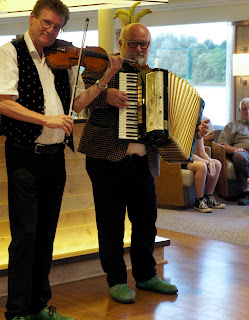 Posted by LateToTheHaight at 5:54 PM No comments: