Fogbows, preening pelicans, humpback whales, Risso’s dolphins and forty-plus Canada geese all flying in formation – that sums up an amazing day trip to Monterey. On top of all that joy: a memorable heirloom tomato, an artichoke picked 20 minutes from the table where it was served and a Bloody Mary enhanced with olive tapenade, and topped off with three meaty shrimp! 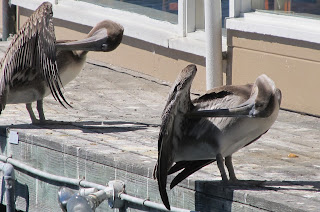 First, the fogbows. Never heard of them? Me either, but Friday morning my friend Carolyn and I drove through three of them along the road that leads to the top of Twin Peaks, stopping three times to celebrate that we literally represented the pots of gold.

According to Wikipedia: “A fogbow is a similar phenomenon to a rainbow that appears in fog. Because of the very small size of water droplets that cause fog, the fogbow has only very weak colors, with a red outer edge and bluish inner edge. In many cases when the droplets are very small, fog bows appear white, and are therefore sometimes called white rainbows. This lack of color is a feature of a fog bow which distinguishes it from a glory, which has multiple pale-colored rings caused by diffraction.”

Now the details. Driving in morning fog up and over Twin Peaks (922 feet high), we saw an arc of light with pale pastel colors glowing from within – apparently a glory. We oohed and ahhed and laughed and loved it. We drove higher, and saw a second one. I remember this one as an arc of pure light – a white fogbow. We stopped again and hooted and hollered in the early morning air. The third fogbow was definitely a glory. Neither of us had ever seen anything like it, and we decided a great day lay ahead.

Heading down the other side of the hill, we paid homage to the amazing Pride of Madeira (Echium candicans), conical shrubs that grow up to eight feet tall, covered in bright purple flowers. I have photographed them on Highway 1, overlooking the sea. 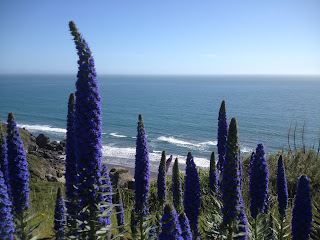 We reached Monterey about 11 a.m., and walked down the wharf. Hosts and hostesses from every restaurant raced out to meet us, offering chowder, reciting the day’s specials and reading aloud the posted menus. How annoying! We escaped to check in at the Monterey Bay Whale Watch, where we asked where to find the best lunch on the wharf. We got some recommendations, and we also learned that our trip, scheduled for 2 p.m., might be cancelled because of increasing wind and waves.

Undaunted, we reminded ourselves about the three fogbows and headed for Café Fina. The best part of lunch was a juicy, flavorful heirloom tomato, grown in the restaurant owner’s garden. We also liked our server’s cool Jerry Garcia tie, which featured the same orange, gold and yellow colors of the tomato. Shortly after 12, we learned that the captain had cancelled the whale-watch trip. Slightly daunted, we made a new plan, to head to the Monterey Bay Aquarium, an amazing place. 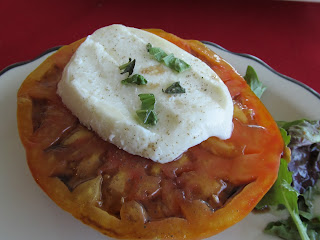 We made this plan while standing in front of another whale-watch tour operator office, one that we soon noticed seemed to be open for business. Inside, we learned that a trip was leaving in five minutes. I asked about the small craft warnings, noting that Monterey Bay Whale Watch had cancelled their afternoon trip. The desk clerk replied, “We have a bigger boat, so we are going at 12:30. All other afternoon trips have been cancelled.” All our whale-watch clothes, our layers – sweatshirts, fleece jackets, windbreakers and rain gear – were in the car. We had no time to get to the parking lot, get our stuff and be on board for the departure, which was imminent.

Quickly, we made a new plan – just get on the boat! I grabbed a fleece jacket off a display ($20), whipped out my credit card and said, “We’re going. I want a ticket, a pass to the upper deck and this jacket.” The guy at the desk said, “I love you!” Carolyn had just bought a sweatshirt in a gift shop, we both had baseball caps and she had sunscreen in her purse. We trotted down the steps and hopped on the Princess Monterey just in time, making do with what we had – which turned out to be exactly what we needed. Even better news: The boat was only about one-third full! We talked with two other women who had hastily bought jackets to make the trip at the last minute and we met Sophie, a nine-year-old girl on her first whale watch.

The Monterey Canyon, one of the largest underwater canyons in the world, begins about a mile off Moss Landing, which is in the center of Monterey Bay. The canyon extends 95 miles out, reaching depths of up to 11,800 feet. Upwelling in the canyon causes concentrations of food, and food brings birds, whales and other sea creatures. When we reached a depth of about 2,000 feet, I spent some time chanting the Latin name of the humpbacks we hoped to see. Soon we found them! We spent over 30 minutes in the company of two large humpback whales who were “logging,” resting on the surface in between making shallow dives to nibble on plentiful sardines.

Quick science lesson: Megaptera novaeangliae (the “big-winged New Englander”) grows 40 to 45 feet long and weighs between a ton and a ton and a half per foot. (You do the math.) They have the longest flippers of any whale, 13- to 15-foot-long scalloped “wings.” Their flukes (tails) measure 13 to 15 feet wide, and the pattern on the underside of the tail is unique to each whale. Humpbacks are acrobats, frequently hurtling up and out of the sea, but the two we saw were in a mellow mood and neither jumped. We did come close to the whales – as close as the law allows – and Carolyn got some nice photos. (See below.) My pictures were mostly of where whales just were, as I can never stop watching, even after almost 31 years of taking part in this magnificent spectator sport. 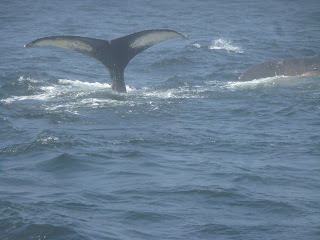 We also saw a lot of large bright orange jellyfish (none would hold still for a photo) and one called a scrambled egg jellyfish, said to be a favorite food of the leatherback turtle. Then about a half dozen Risso’s dolphins darted by, mottled dolphins that range from 10 to 14 feet long. I was reminded that any day on the water is a good day!

After the trip, we splurged on pieces of chocolate, stopped for coffee and then headed to The Old Fisherman’s Grotto, family owned and operated since 1950. We shared a delicious grilled artichoke (grown in Castroville, just up the road) and made casual conversation with a seagull just outside the window that clearly was interested in any leftovers we might have. (We didn’t.) Highlights of the meal included that previously mentioned Bloody Mary, and scrumptious olallieberry pie. 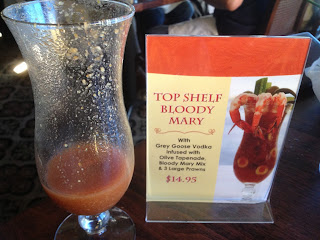 At 6:30 p.m., we put the top down on Carolyn’s VW Cabiolet and headed back to San Francisco, a two-hour drive. About halfway home, we saw about 40 Canada geese, flying in formation in three groups, silhouetted against the tawny hills and darkening sky, which was still tinged with golden light from the sunset. Spectacular beauty first thing in the morning, at sea in the afternoon and again on the road at dusk. Another great day in northern California!

One of the top tourist destinations in the world and the sixth most-visited city in the U.S., San Francisco drew some 16.5 million visitors last year. The streets here are particularly busy on a weekend day in August, but today I went out anyway. It’s been awhile since I played tourist in this fine city.
This morning when I settled in with the Sunday paper (a chronic(le) habit), I read about A Fair to Remember, a small neighborhood arts and crafts festival in Jack Kerouac Alley in the North Beach neighborhood. Jack Kerouac Alley is next to City Lights Books (www.citylights.com/), a favorite place, so I tossed aside the paper and set off on the 50-minute bus ride to North Beach.
Fortuitous signs at the bus stop: Three wild parrots circling overhead, chattering, and a local helping a man clutching a crumpled map of the city. People here are helpful and friendly -- I appreciated that when I first moved here, and now I offer to help when I see a map-clutching visitor. Plus, on the bus, I encountered five young people heading for Outside Lands, a renowned music festival. They were from southern California, and had bought the package tickets for the three-day event. One fellow showed me a video on his phone of Paul McCartney performing Friday night. Ah, Paul! 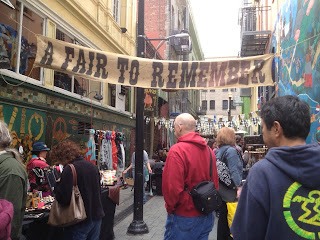 Once in North Beach, I popped into Reveille Coffee Company (www.reveillecoffee.com) for a decaf, nonfat latte, my personal vice. Then I headed across the street. The art fair was just the right size; an alley’s worth of vendors with great stuff and live musicians setting the mood right in the middle. I have been to big street fairs here and I will go again, but this was so much more inviting in so many ways.
At her Heart’s Desire booth, Ann Marie Hodrick (facebook.com/heartsdesirejewelry) was selling lovely earrings, including some made with luminous yayin beads made form German glass, and also a gorgeous chunky lapis lazuli bracelet. Ironically, Ann Marie was interested in my Up band, Jawbone’s fitness bracelet that I wear to track how much I walk! 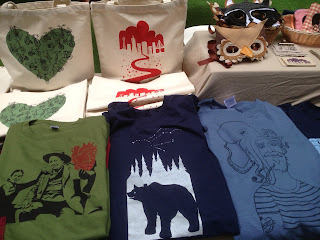 Next I spotted a great T-shirt that showed a narwhal surfacing next to an iceberg. The shirt reads: “Narwhals are real.” I asked the woman staffing the Dawn Kathryn Studio (www.etsy.com/shop/DawnKathrynStudio) booth just who(m) doubts that narwhals are real. She said a surprising number of people doubt the whales’ existence. One customer asked her whether a narwhal was a character from the Harry Potter books! We decided that was insulting to narwhals and to Harry Potter as well. Loved the totes and felt masks at the booth as well.
Elizabeth Ashcroft (www.artbyashcroft.com/) makes artistic collages and jewelry from words and other bits of books, and she also sells acrylic paintings that leap off the canvas. Her image of the Buena Vista Café was particularly inviting (Cheri, come back to San Francisco!). Somehow, I managed not to buy the book-as-wall-art covered with ginkgo leaves. 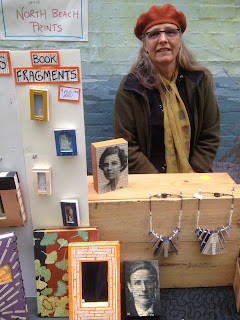 Back out on the street, I saw something I really needed – an adorable block print shirt, size 2, depicting a fanciful hippo -- in the window at YeahYeah!PonyPrince (www.yeahyeahponyprince.com/home). Bought the shirt for Milo and also got a tip about where to eat lunch: Giordano Brothers (www.giordanobros.com/), where the sandwich meat of your choice comes smothered with coleslaw and studded with fries, all tucked between two pieces of fresh Italian bread. The Giants game was on, so I enjoyed half a beer (Widmer’s hefeweizen, to be exact) with my Italian sausage sandwich. 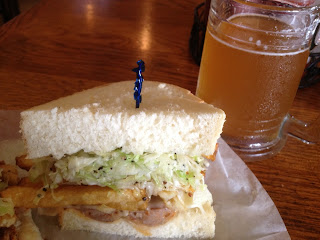 Some Sundays, it’s great to stay in, but this was a fine day to meander in San Francisco!

Posted by LateToTheHaight at 5:59 PM No comments: