Grandchildren. Crepey skin. Politics. Recipes for stuffed pepper soup. Kindles versus “real” books. Crabby knees. Empathy among Gen Xers. River cruises. These topics and many more came up over the course of a weeklong visit to St. Louis, where I grew up and lived most of my adult life before moving to San Francisco in 2010.

The occasion was my 50th high school reunion, but that stellar event took up just one evening. The rest of the week was one big love fest, with brunches, lunches, coffee dates, happy hours, dinners and parties. I also managed assorted drive-by hugs (thanks go to Judy, who drove), two shopping expeditions, an appointment with Michael, my in-town acupuncturist (doesn’t everybody have two?) and some quality time hanging out with dear friends. 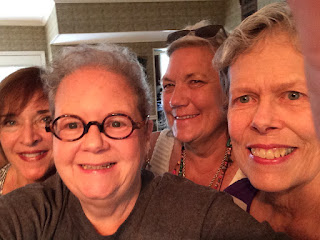 The big reunion was great (do go to yours) though it started off oddly. When I walked into the upstairs party space at Schlafly’s Tap Room, I looked at all the happy people talking there and thought, “These are my parents’ friends! Maybe I will see Dorothy and Tony.”

Quickly I realized they are gone, as are my parents. These people in the room were MY friends.

With that, I joined the group closest to where I stood and soon was laughing and talking with them, though I was disappointed momentarily to learn from Randy that our classmate Dennis had stayed home to watch Randy’s dog instead of coming to the party.

About 170 people were at the event; a good turnout for a graduating class that numbered over 630. Two or three of my classmates look exactly as they did in high school, and I told them so. Most of them look their age – our age – in spite of professional hair color and artfully applied makeup. But as Mary said, “We’re all beautiful!” 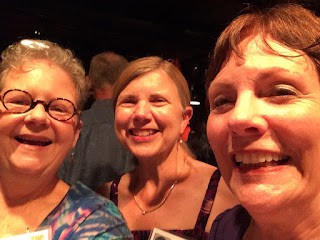 In a previous post, I wrote about looking forward to seeing Don because I remember dancing the polka with him back in junior high. When I found him in the crowd, I asked if he had read what I wrote. He laughed and said yes. When I said, “Please don’t ask me to dance,” he laughed harder and replied, “I can’t.” We certainly aren’t feeble, but we aren’t all as mobile as we used to be either.

One lovely moment occurred when Alan, the editor of the junior high paper, and Bob, the editor of the high school paper, stood mock-arguing about who could take some credit for my success as a writer. “Hey, I had something to do with it,” I said, and we all laughed.

Another classmate and I take credit for convincing the president of our senior class to attend the event, and Jim clearly was glad he had made the trip from California. Mary, Jim and I took a photo to send to Dean, his wife, who graduated in the class behind us. Next year is her big year.

Driving downtown for the reunion, I got a bonus: A great view of the Gateway Arch, my favorite national monument. There it was in all its glory! I remembered I was present on Oct. 28, 1965, when the Arch was “topped out” and the last section was put in place. I also remembered I wrote the magazine cover story for the Post-Dispatch when the city celebrated the 25th anniversary of the Arch. Or was it the 30th? 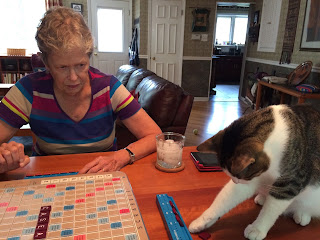 My high school reunion was a grand event, and the largest of the many mini-reunions that filled the rest of my time in St. Louis. For instance, I reconnected with

• my Five Favorite Female Friends (we met over 40 years ago)

• my son’s dad and Other Mother, who held a Labor Day potluck (seven desserts!)

• a dozen female pals from my days at the St. Louis Post-Dispatch

• a special friend from my former water exercise group

• the writing workshop group I started over a decade ago

• friends from the Repertory Theatre of St. Louis

Not only did I get to see my theater buddies – with my longtime pal Gail I got to see the dress rehearsal for an extraordinary production of “Follies.” The Rep is celebrating its 50th anniversary this year, and I’m proud to say I was in the audience when the theater opened a few blocks from my high school back in 1966. 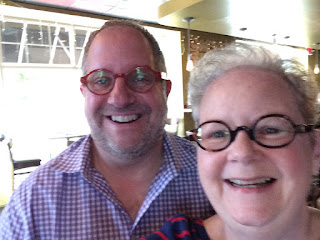 For many years, I was a Rep subscriber. Then I attended as a theater critic for the paper. After I left that job, I continued to see shows right up until I moved away. Walking into the familiar lobby Sept. 6 was eerie in a good way, evoking an acute awareness of the many, many times I have done so before. It was great to be back, and such a privilege to get a sneak peak at this wonderful show. 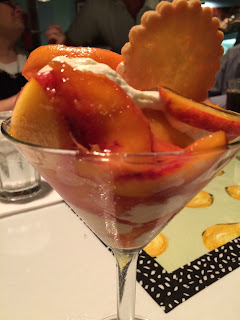 While in town, I also walked into a lot of restaurants and enjoyed some great food. With friends, I went to Remy’s for mahi mahi and polenta fries, Cravings for bacon-wrapped figs and a remarkable fresh peach sundae, the Boardwalk Café for pancakes, Milagro for tacos and street corn, PJ’s Tavern for a hearty Reuben, Robust for “figgy piggy” flatbread and Big Sky Café for vanilla brioche French toast. Yum! And of course I hit Starbucks more than once (even more than twice) with Champe, Judy and Vickie. 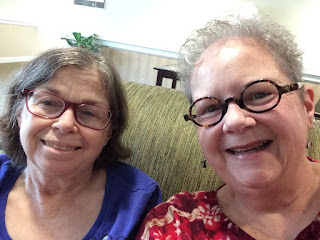 Another day, I walked into a senior living center, where my best friend from high school and the maid of honor at my wedding now lives in the memory care unit. Susan knew me, she was glad to see me and I now know she is content and well cared for in a safe, structured environment. After the visit, I had lunch with her husband, and I like to think we were able to help each other on this journey that neither of us ever imagined.

You can go home again, even after you’ve made a new home in a different city – and this weeklong return to my roots overflowed with love.


Posted by LateToTheHaight at 9:58 AM 3 comments: